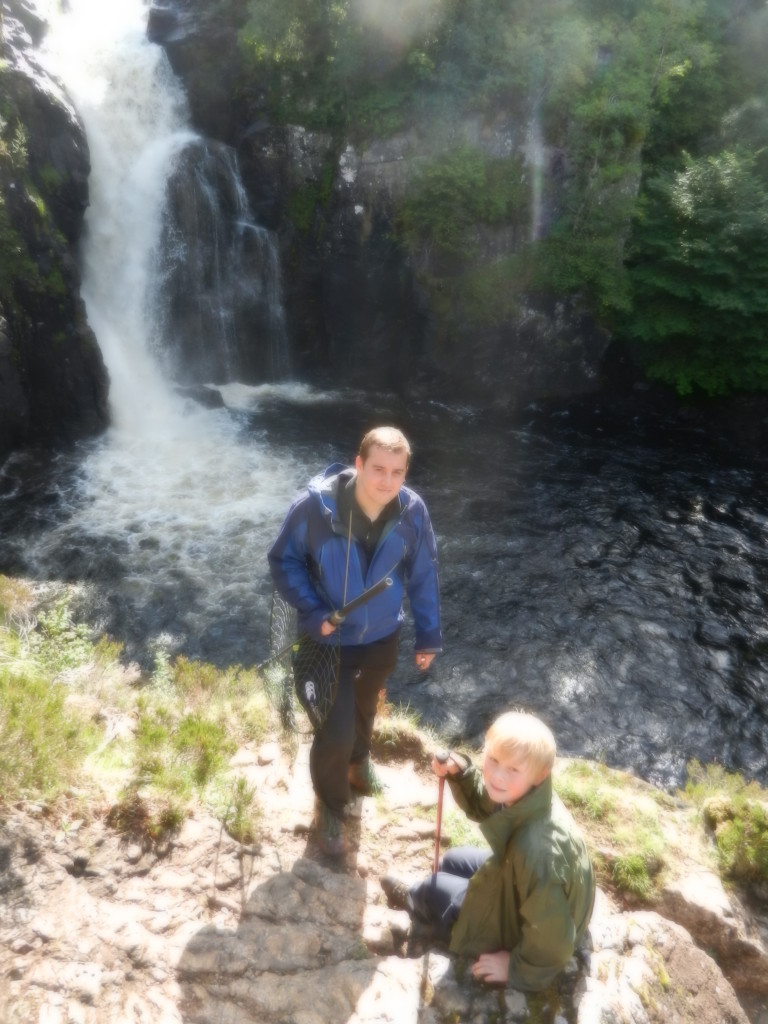 At the end of September we heard rumours of an enormous fish caught on the River Kirkaig. Captor Graham Hancock kindly wrote to us with details of the big fish and with his permission we reproduce below.

‘This year I had caught a 6lb and a 12lb fish earlier in the week and conditions seemed good when I started fishing the Big Falls pool  on Saturday 28th September. I was using 10lb nylon and fishing with a size 6 Orange Stoat (simply a stoats tail with an orange feather throat) on the dropper and a size 8 allys shrimp on the point.

The pool can only be fished from one stance which is a rock ledge about 12 feet above the water. If you catch a fish then when you are ready to net it you climb down a rope that is anchored to the rock face by a ring bolt and end up on another rock which can be between 3 foot above or 3 feet below the water depending on river height. On Saturday the rock was about 1 foot above the water.

Most fish are hooked by bouncing the flies off the cliff on the opposite bank so that they land in the water as close to the cliff as possible, you then hand line the flies back towards you and the fish normally take within the first few yards of the retrieve. That is exactly what happened on about my fifth cast of the day and a strong pull resulted, followed by the fish taking a couple of strong runs back and forward across the pull.

The fish then held station in mid stream and although I had still not seen the fish I knew it was big because I could not bring it up to the surface. At this point with the line taught and pretty much stationery I saw a small fish of about 5lb flashing about close to my line as if it was hooked. This continued for about 30 seconds during which time I saw it had my Allys shrimp in its jaws. There was only one conclusion, I had a big fish on the dropper, still out of sight, and a second smaller salmon on the point fly so I feared disaster.

I never saw the small fish again so the two fish must have headed in different directions at some point and the nylon snapped at the dropper knot leaving me attached to just one big fish on the Orange Stoat.

The fish then proceeded into the deep water where the waterfall has hollowed out a deep recess under the rock you stand on. In the past I have had fish go into this part of the pool so that they are directly under my feet and have taken the line out to the backing, straight down, very disconcerting! This big fish spent a lot of time just sitting in that spot with an occasional trip across the pool and then back to the same spot.

After about half an hour the fish started to tire and I finally caught my first glimpse of it which confirmed it was a very big fish.

After about another ten minutes I thought it was possibly ready to net and so headed down the rope and grabbed my 30 inch diameter net which I had propped on the lower rock earlier. On my first attempt to net it the fish came to the surface side on to the net and when I tried to lift the net its head was hanging over one side of the net and its tail over the other and it would not bend to slide in and took off across the pool again. This happened another four times with the fish proving to be just too big to fit in the net.

On the sixth attempt it came to me tail first and I managed to secure it and get a really good look at it. I could see the fly and managed to easily remove it without lifting the fish from the water. The cock fish was not a bar of silver but it was not stale either. its kype was only about an inch long and the fish was solidly built. I reckoned it must be at least 30lb and would have loved to have kept it, not least because a decently fresh fish of this size would have smoked beautifully but also because I knew I would meet a lot of sceptics!!!

However all big fish have to be returned so how was I to get an accurate weight? With the fish still in the water and the handle of the net flat on the rock I pulled out my spool of nylon, lay down on the rock, held the nylon against the fish, bit off the correct length of nylon and put it in my pocket to measure later. The fish was sitting comfortably in the net so the next problem was to get it out and properly recovered so while still lying on the rock I took the lanyard of the net in my teeth and got a hold of the fish and managed to get it out of the net by letting the net fall into the river. I supported the fish for a couple of minutes with the net still held in my teeth and the fish recovered its strength very quickly and took off like a torpedo.

I would add at this point that I could barely hold onto its wrist where I was holding it at the tail as although I have big hands my hand could get no where near actually encircling its wrist. Later on by comparing the feel of it with the feel of my forearm I reckon the circumference of the wrist was around 11 inches.

After catching a fish I always renew my cast in case it has been weakened but I was unable to do this and resume fishing for about half an hour as my hands were shaking so badly after all the excitement I could not get the nylon through the eye of the hooks. I did eventually continue fishing and managed to catch another three fish, two from the Falls Pool and one from another pool they weighed 5lb, 7lb and 9lb. All six fish from my trip were returned as only small cock fish may be kept for the pot.

On returning to the hotel I borrowed a ruler from the receptionist and measured the bit of nylon at 49.5 inches. On checking the standard length to weight chart that comes up as 38lb and I will not argue with that.

As I said at the start there were no witnesses so there will not be any trophies for me but I have a memory to treasure and wanted to pass the story on. A couple of tourists arrived five minutes after I released the fish, if only they had moved a bit quicker on the two and a half mile climb up the path to the waterfall.’

The picture above is of the Big Falls pool and shows the somewhat tricky situation that Graham was faced with. Well done Graham, a memorable fish, and as you say what a shame the tourists hadn’t set off five minutes earlier!

If you have any Scottish Salmon fishing queries then please contact the Sporting Lets Team.